The PMS-400A module is a gated photon counter and a multiscaler at medium time resolution. The board is applicable to luminescence decay of inorganic samples, phosphorescence, delayed fluorescence, chemo luminescence and LIDAR. The board offers a PCI interface and can be easily installed in nearly all PCs.

The PMS-400A is a module with two fast gated photon counting and multiscaler channels. All devices contain ultra-fast discriminators for the counting and gating inputs, two fast 32 bit accumulation counters, which enables accumulation with virtually no dead time between sweeps (< 100 ns), a memory for storing the counter results, the timing and control logic.
The PMS counts all pulses with an amplitude greater than a selectable discriminator threshold and stores the results into subsequent locations of the memory. The inputs can be gated to count pulses either inside or outside an externally applied gating pulse. The on-board timing and control logic controls the counting interval and the storing of the counting results. Up to four PMS modules, i.e. eight counter channels can be operated in one computer by the same control software. Different operating modes allow for steady state measurements (luminescence spectra), waveform recording (luminescence decay curves) and event recording (e.g. for single molecule detection). The PMS boards can be used for count rates of more than 800 MHz and can be gated by pulses down to 1 ns FWHM. Therefore, the modules are applicable not only for photon counting, but also for other fast pulse counting applications.

All module functions are controlled by the ‘PMS Standard Software’. This software package runs under Windows and allows for parallel operation of up to four modules, i.e. 8 counting channels. The results are displayed either as bar graphs or as curves that represent the photon density as a function of the time or of any other externally variable parameter. In conjunction with a DCC-100 detector control board a wide variety of experiment control functions can be performed directly from the PMS Standard Software. Furthermore, the software allows setting of the device parameters, loading and saving of measurement data and system parameters, evaluation of measurement data and arithmetic operations between different curves. To facilitate programming of special user software DLL function libraries for Windows and for the Windows CVI system of National Instruments are available. 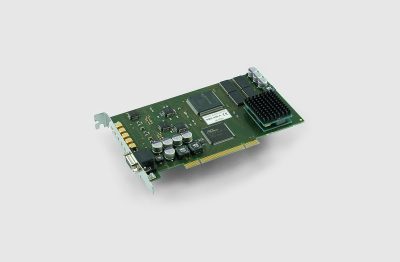