What is the Range of Application of Ultrashort Pulsed Lasers?

The most important field for our ultrashort pulsed lasers is a scanning technique called fluorescence lifetime imaging (FLIM). Specifically, the TCSPC-FLIM technique is based on scanning the sample with a pulsed laser beam from a pulsed diode laser at a high repetition rate followed by the detection of single photons of the fluorescence signal returned from the sample. Each individual photon is determined by its time in the laser pulse period and the position of the laser spot in the scanning area at the time it was detected. The recording process creates a photon distribution over these parameters. The result can be seen as an arrangement of pixels, each containing a complete fluorescence decay curve in a great number of time channels.

Ophthalmic FLIM is one of the areas of application for our advanced lasers. The basic requirement for this application is the excitation of the human eye by a picosecond diode laser.

The beam generated by the diode laser is projected directly into the pupil of a patient’s eye. The fluorescent light returning from the background (fundus) of the eye is detected in two wavelength channels.

This light is captured with FLIM modules, processed in imaging processes and evaluated. The data obtained in this way provide doctors an opportunity to identify early stages of eye diseases more quickly than methods which are currently available. Therefore, pulsed diode lasers can be of great help in early detection and treatment and ultimately improve the quality of the patient’s lifes.

The “Laser-Hub”: When More Than Two Laser Lines are Needed 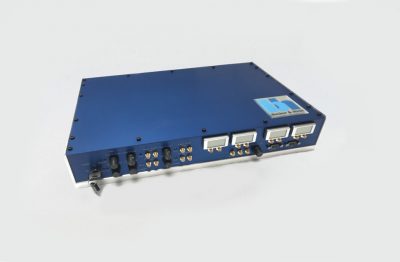 The LHB-104 Four-Laser Box, also called the “laser hub”, contains up to four BDS-SM lasers. The beams of the individual lasers are combined into a single free-beam output or into a single-mode fibre. One single box contains control electronics equivalent to the LSB-C and LSB-C2 Laser Switch boxes. In addition, that single box contains wavelength-multiplexing electronics, inputs for control signals, and outputs for the synchronisation signals to SPC modules.

Becker & Hickl can provide a wide range of lasers for different purposes. Two examples are particularly worth mentioning here:

Due to their visible range, both, the SM and MM lasers are suitable for special applications. These include the excitation of a wide range of fluorophores and other biological samples, as described in the following.

The bh BDL- and BDS lasers are especially designed for application in laser scanning microscopy. They have a fast on/off control input to turn off the laser during the beam fly-back of the scanner, and to multiplex several laser of different wavelength.

The BDS-SM lasers are small size modules with a size of only 40 mm x 70 mm x 120 mm. The lasers contain the entire driver electronics. As usual, they are operated from a simple +12V power supply. The BDS ps diode lasers are available both with free-beam and single-mode fibre output. The pulse width is on the order of 50 to 90 ps, the pulse repetition rate can be switched between 80 MHz, 50 MHz, 20 MHz and CW.

All the typical diode laser wavelengths from 375 nm to 785 nm are available and other on request. The BDS lasers use the same driver principle as the BDL-SMN lasers. Thus, high optical power at good pulse shape is available, as seen in the graphic beneath. The output power is stabilised by an internal regulation loop, and fast on-off switching is implemented. The lasers have a synchronisation output to the bh TCSPC modules and a trigger input for synchronisation with other pulsed lasers. 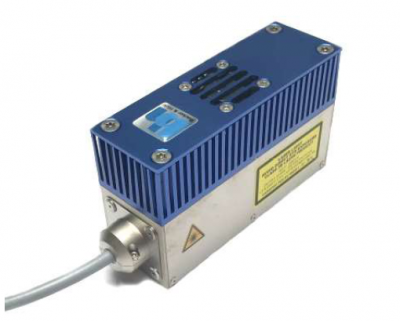 The BDS-MM lasers are multi-mode versions of the BDS-SM lasers. Depending on the wavelength version, the CW equivalent power at 50 MHz repetition rate can be as high as 20 to 50 mW. In most cases, the pulse shape remains free of tails and afterpulses up to more than 10 mW. A few compromises had to be made, however: Due to limitations in power dissipation the MM lasers have no CW mode, and the light is difficult to focus into optical fibres. If possible, the BDS-MM lasers should be used with free-beam optics or, if fibre coupling is unavoidable, with multi-mode fibres with core diameters of 200 µm or larger.

As shown above, bh’s pulsed diode laser have plenty of advantages, opening a wide field of applications. Some of them are to be portrayed here. 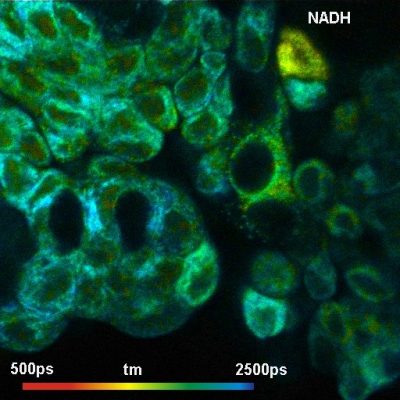 As a very important application example for ultrashort pulsed lasers Metabolic Imaging is to be mentioned here. Its basis is the simultaneous acquisition of lifetime images of NAD(P)H and FAD in order to minimise the influence of photobleaching, focus drift, and possible physiological changes. This can be obtained by laser multiplexing and multiplexed TCSPC. The signals in the two emission wavelength intervals are recorded by two parallel FLIM channels. The core piece is the bh DCS-120 confocal scanning FLIM system. Metabolic FLIM with the DCS-120 is thus only a matter of using the right lasers and choosing the right setup parameters.

The adjacent figure illustrates the performance of the system using human bladder cells. TM images, a1 images and FLIRR images make it possible to distinguish between normal cells and tumour cells. The data obtained by Metabolic Imaging are invaluable for treatment. 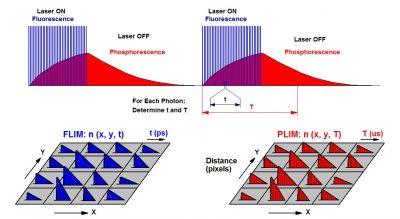 Furthermore, pulsed diode lasers are a crucial component for simultaneous FLIM /PLIM, a technique that is only made by bh in this form.

In contrast to other techniques, not one but several laser pulses are used for each phosphorescence excitation cycle.

The excitation laser of a FLIM system is modulated with a period in the microsecond or millisecond range.

A combination of wavelength multiplexing and spatial multiplexing is used in diffuse optical tomography (DOT). The principle is shown in the figure below. Several picosecond diode laser beams are combined into a single optical fibre and multiplexed. The fibre with the combined lasers is connected to the input of a fibre switch, or split into several parts which are connected to several fibre switches. The fibre switch multiplexes the laser light (which by itself consists of several multiplexed laser wavelengths) consecutively into a large number of optical fibres which deliver the light to different sample positions.

The diffusely transmitted light is recorded by a large number of detectors at other locations at the sample. The detector signals are recorded by parallel TCSPC modules the ‛Channel’ inputs of which are used to record the signals of different source positions and laser wavelengths into different waveform memory blocks. To increase the number of detector positions the setup can be extended by routers.

Depending on the application for which you need a certain type of ultrashort pulse laser, you can find out about single products and composite modules on our website. Simply visit the relevant page for more information.

Designed and manufactured by Becker & Hickl – bh delivers prominent picosecond diode lasers with wavelengths from the NUV to the NIR. All bh pulsed diode lasers work with simple +12V power supply or pull their power from the USB port of a PC or Notebook Computer. Other features are high repetition rate, short pulse width, unprecedented timing and power stability, and extremely low electrical noise level. The complete driver electronics is integrated in the laser module. All bh diode laser modules are directly compatible with the bh TCSPC modules. On this page, learn more on the various applications of our product, especially in TCSPC systems. Choose your ps laser now:

Unit of Up to 4 Laser Lines