Metabolic Imaging by Simultaneous FLIM of NAD(P)H and FAD

We describe a metabolic imaging system based on simultaneous recording of fluorescence-lifetime images of NAD(P)H and FAD. We demonstrate the performance of the system at the example of human bladder cells. Normal tissue and inflamed tissue were clearly discriminated from tumor tissue, as was later confirmed by the histology results. 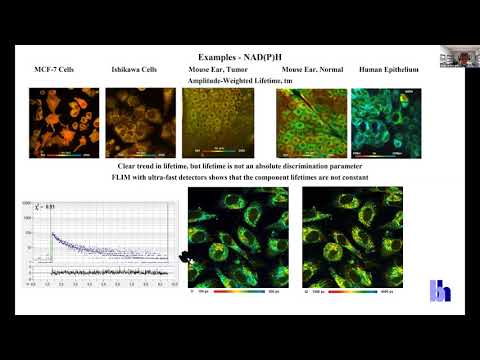 We describe a metabolic imaging system based on simultaneous recording of fluorescence-lifetime images of NAD(P)H and FAD. The system uses the multi-dimensional recording capabilities of the bh TCSPC FLIM technique. Two excitation wavelengths are multiplexed to alternatingly excite NAD(P)H and FAD. One FLIM channel detects in the emission band of NAD(P)H, the other in the emission band of FAD. The FLIM data are processed by SPCImage data analysis software. For both channels, the data analysis delivers images of the amplitude-weighted lifetime, tm, the component lifetimes, t1 and t2, the amplitudes of the components, a1 and a2, and the amplitude ratio, a1/a2. Moreover, it delivers the fluorescence-lifetime redox ratio (FLIRR), a2nadh/a1fad. We demonstrate the performance of the system at the example of human bladder cells. FLIM was acquired from the cells immediately after the tissue had been excised from the bladder. After that, the samples were evaluated by histology. Normal cells and tumor cells were discriminated in the tm images, in the a1 and a2 images, and in the FLIRR images. The most reliable discrimination parameter turned out to be the amplitudes, a1 and a2, of the NAD(P)H fluorescence. Normal tissue and inflamed tissue were clearly discriminated from tumor tissue, as was later confirmed by the histology results. Also the FLIM data from the FAD channel showed significant differences for normal and tumor tissue. However, the FAD results were less consistent than those of the NAD(P)H. The interpretation of FAD FLIM data therefore requires further investigation.

Wolfgang Becker is specialist in time-resolved optical detection techniques. He obtained his PhD 1979 in Berlin, Germany. Since 1993 he is the head of Becker & Hickl GmbH in Berlin. His field of interest is development and application of advanced Time-Correlated Single Photon Counting techniques. He started to develop multi-dimensional TCSPC techniques in 1989, and is the originator of the TCSPC FLIM technique that is now widely used in laser scanning microscopes. He is author of the bh TCSPC handbook, now out in the 8th edition, and of ‘Advanced Single Photon Counting Techniques’, Springer, 2005, and editor of ‘Advanced Single Photon Counting Applications’, Springer, 2015. He likes cats, skiing and beach volleyball.