We present an ultrafast TCSPC setup consisting of a bh SPC‑150NX TCSPC module and a SCONTEL superconducting NbN detector. The entire system delivers an instrument response function (IRF) with a full width at half maximum of 17.8 ps. The RMS value of the overall single-photon timing jitter was determined to be 7.9 ps. For testing the time resolution we used a dual-output AVESTA Project EFO-80 laser. The laser emits sub-ps pulses at a wavelength of 1560 nm and a repetition rate of 50 MHz. One output of the laser was used to generate a synchronisation signal for the TCSPC device via a fast photodiode, the other one was fed into the detector via an optical attenuator. The single-photon pulses from the detector were amplified by standard low-noise GHz bandwidth RF amplifiers and fed into the ‘CFD’ input of a bh SPC‑150NX TCSPC module. Compared to the commonly used SPC‑150 the SPC‑150NX has a 4 times higher discriminator bandwidth and 2 times faster TAC ranges. The minimum time channel width is 405 fs, the electrical IRF width is 3.6 ps FWHM. For the entire system, including laser, detector, reference photodiode, fibre system, and TCSPC device we obtained an IRF of 17.8 ps FWHM, see figure below, left. The timing drift of the setup was less than 1 ps over a time of 5 minutes, see below, right. Please download application note.
For more information please see bh TCSPC Handbook and SCONTEL Superconducting Nanotechnology. 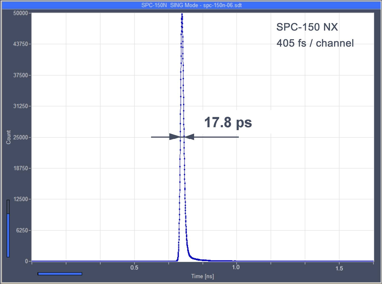