The bh BDS-SM series picosecond diode lasers feature a timing stability in the sub-4ps range. The figure below shows a series of TCSPC recordings of the laser pulses over a period of 640 seconds after power-on of the laser. The left panel shows the data displayed in colour-intensity mode, the right panel in multi-curve mode. The measurement was performed by a bh SPC-150NX TCSPC module and a bh HPM-100-06 hybrid detector. The figure shows that a timing drift of the light pulses versus the synchronisation pulses, if present at all, must be far smaller than the laser pulse width of 49 ps FWHM.

The true shift of the pulses can be determined by calculating the first moments of the curves, and displaying the results over the time after power-on. The resulting curve is shown below. The first moment remains within ±2 ps over a period of 640 seconds from power-on. Please note that this value is the overall timing drift of the entire TCSPC system. It not only contains the  timing drift in the laser but also possible timing drift in the detector and the TCSPC electronics. The high stability means that TRS, FLIM, or NIRS experiments can be started right away, from the first second after turning on the laser, and do not require warm-up or repeated reference measurements. 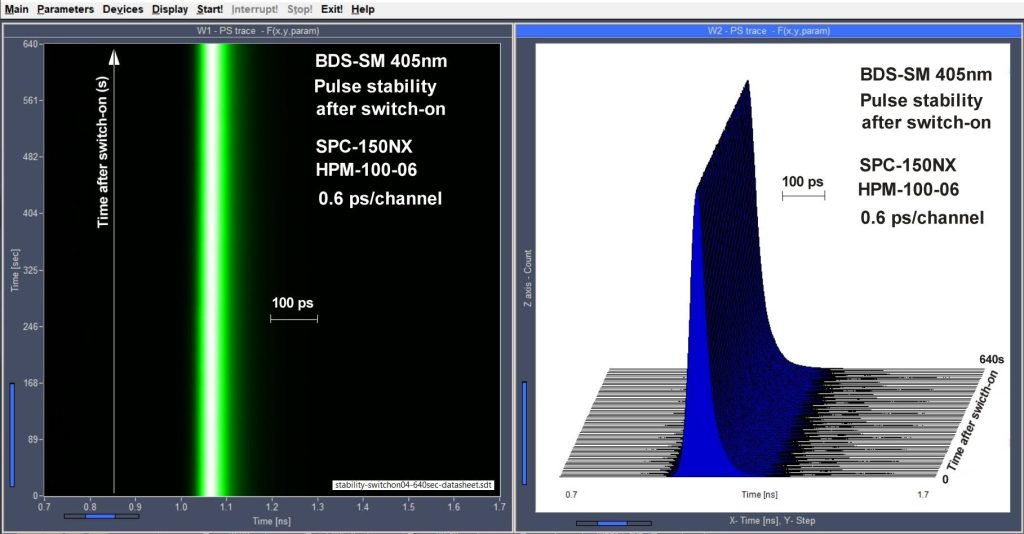