The HRT-81 eight-channel router connects up to four PMT detectors to a single bh TCSPC device. The function of the router is based on the assumption that the detection of several photons in different detectors within the response time of the TCSPC electronics is unlikely. Therefore, it is possible to combine the single-photon pulses of several detectors in one photon-pulse line, generate a digital 'routing' signal that relates the individual photons to the detectors, and record photons of different routing information into separate memory blocks in the TCSPC module, please see Multi-Dimensional TCSPC on this web site or The bh TCSPC Handbook, chapter 'Multi-Dimensional TCSPC Implementations'. The principle is illustrated in the figure below.

Routing is an inexpensive method to record optical signals from several detector with a single TCSPC module. However, it has limitations at high count rates. It is then no longer possible for the encoding electronics to reliably distinguish between subsequent photons. We therefore recommend routing only for experiments with peak count rates no higher than about 1 MHz. For count rates above 1 MHz better use multi-modules TCSPC systems, see 2-8 Channel TCSPC Systems and TCSPC Modules, bottom of selection table. 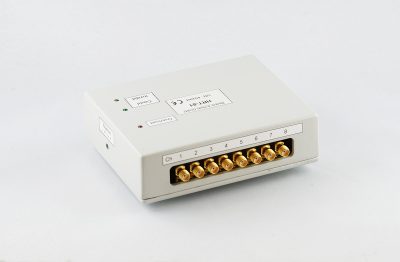